Another lightly used Bookcliff airstrip. Moderate down slope south to north.
Some light brush and weeds but mostly grass. Look out for grazing cattle and their droppings.
No wind sock but there is a small anemometer on the structure near the NW corner of the strip.
Strip is actually 3700 feet long. 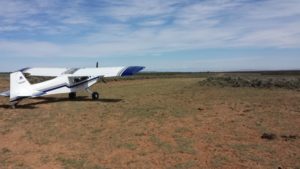 Grass strip bordered by low trees. Camping areas at both ends. Slight uphill grade to the south but easily…