Hi gang, It has been a wile, but Arizona has a new governor and a new state land commissioner! Governor Ducey committed to us, during his campaign, that he would support equal access to state trust lands. He ousted the previous state land commissioner that had stood against aviation, and we are hearing from various legislators that the new appointee is a breath of fresh air. Senator Griffin met with the Governor a couple of weeks ago and presented our case and received a positive response from the governor, who even offered to meet with us. In the mean time, we started working with the new commissioner and her staff to get a meeting set, which is now on for October 15th! We are very hopeful, especially since we now have a state attorney general opinion supporting the position that we have held in every meeting with the previous commissioner, that being that the state has complete immunity from liability as long as they treat aviation as any other recreational access, not requiring some special lease or other revenue generating fee. In other words accepting the existing $15 permit that every other recreator pays to get on state trust land! We will keep you posted! 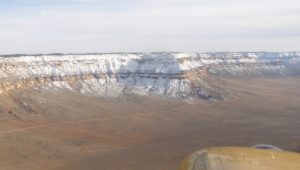