Sluice Creek airstrip is located on a rocky bar next to the Snake River on the Oregon side.  The canyons are deep and the strip is uneven and rough - land with extreme caution!

Typical approach is upstream (south) and takeoff is downstream. It is difficult to land if the there is more than 3 knots or so of tailwind.  There are tales of pilots taking off upstream (uphill) in a significant headwind.

Someone has helpfully built an arrow from rocks pointing to the runway approach threshold (they need some paint.)  Approaching upstream, the runway slopes slightly downhill from the threshold to about midfield, then slopes significantly uphill to the south end of the runway.  There are several uneven "heaves" on the south end. These can be a problem on takeoff as they can launch the airplane before it is ready to fly.

There are large rocks on either side of the runway, but they're easy to see.  The runway surface is built on an old hayfield and is generally free of smaller rocks.  A good tiedown area is in the level area, midfield, west of the runway.

Camping
There are no formal camping facilities. There is a fire ring off the south end of the runway.

The Snake River trail literally runs down the runway centerline.  You can hike until your soles wear through.

Usage Note: The "emergency use only" designation is ambiguous. The airstrip is located in the Hells Canyon NRA, but is just outside the HC Wilderness boundary.  The area is managed by the Forest Service as part of the Wallowa National Forest.  The HCNRA comprehensive plan considers the airstrip to be closed, but leaves open the possibility of opening in the future after additional study. This is a good opportunity for an aviation organization to get involved. 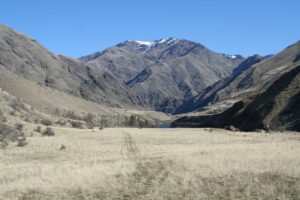 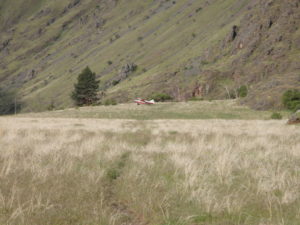 Strip is on the canyon rim. Stunning views to the East. The strip looks like it serves a few cabins in the…

Located in Hell's Canyon, directly across the Snake River (on the Oregon side) from Big Bar…

Big Bar is located in Hells Canyon on the banks of the Snake River (on the Idaho side).  There are…