http://www.meadowlakeairport.com .   FAA ID is KFLY.  Old ID was 00V.  Airport is about 10 NE of COS.  Main NS runway 15-33 in good condition.  Shorter EW runway 08-26 is partially paved, partially dirt, and is very useful when the winds are strong from the west, watch for aircraft taxiing on it however.  High density altitude, EW runway can really be short in the summer time.  Full stops to the west only, if you really need to go around watch for glider operations west of 15-33.

As of June 2013 the new parallel turf runway 15-33 is now open and is an official FAA runway.  Several big tire pilots are using it.  Gliders sometimes use a powerful winch to tow gliders aloft on the
Turf Strip.  Tow altitudes can reach 3000 feet AGL.  (Yes, really.)  The turf strip is pretty bumpy as of 10/2013 but some effort has been
taken to reduce cactus.  I personally recommend tailwheels only and
8.00 tires or larger.  Try to take care not to use the same spot repeatedly.

Expect glider operations southwest of the main runway on the turf strip most
weekends and occasionally during the week, weather permitting.  Through an agreement with the COS TRACON, glider flying is normally announced on 125.00 COS ATIS when gliders are flying.  Glider
tows are preferred to the south due to downsloping terrain south but can also
run to the north on the turf strip. When gliders are operating towing and gliders are to be expected west of the airport and east of the Class C cutout from the surface up to 18,000 MSL if there is lift.

There
is discussion over whether the turf strip and the main runway 15-33 are
the same runway in the eyes of the FAA.  It appears that they are now
being considered by the airport as of 10/2013 to be different runways -
parallel and operating on a waiver (due to proximity).  I don't have all the
details yet.  Just be careful like always.

The short paved strip just to the west of the main runway and the grass adjacent to it is now closed (10/2013).  Expect conditions there to gradually deteriorate unless/until it is revamped into a taxiway.  The grass to the west formerly used by the gliders for landings south of the windsock can be useful to tailwheel aircraft if the winds are strong from an odd direction.  As of 10/2013 it is somewhat bumpy but should be ok in a pinch for any taildragger single with 6.00 or larger tires.  Don't go south of the dirt taxiway to the south opposite "A4", or the "elephant pit" will eat your airplane.  Always check for glider operations on CTAF if you are landing anywhere west of the main runway.  Definitely use the old glider strip and/or grass **at your own risk**; it is airport property but obstructions might spring up without notice now that the gliders use the turf strip instead.

East pattern for power traffic at all times unless using the turf strip.  West pattern for all glider, tow plane and banner tow traffic, and all other turf strip traffic.

Airport resides in a cutout of the class C airspace to the south and west belonging to COS.  Visual boundaries of this cutout are Meridien Road to the West and Garrett Rd. to the south.

Phantom Fuel near Classic offers self-serve fuel 24/7.  I believe American Aviation also provides fuel.  There may be other fuel vendors on field but their status varies.

This airport has an active EAA Chapter - 72 - and is quite busy during Young Eagle rides on 3rd Saturday each month except in winter.  August air show/fly-in can be very popular.  Fly safe! 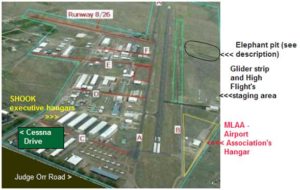 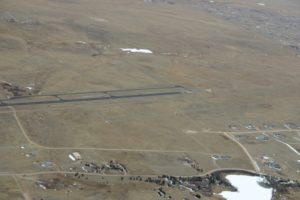 Private airport.  North bit of runway is covered with experimental astro turf, remainder of runway is…